Welcome to Jacksonville – This is where Florida begins. Here you experience Southern Hospitality that makes you feel at home from day one. There are a lot of GREAT home values in this area.

Whether you’re looking for a Single Family Home, New Construction, Town Home or Condo, you’ll find it here and in a price point that suits your budget. This area is made popular by a GREAT COMBINATION OF LIFESTYLE ACTIVITIES. We spend a lot of time outdoors and there is no shortage for something fun to do. Whether you like golf, tennis, boating, fishing, surfing, relaxing at the beach, or attending a Jaguar football games (don’t forget to Tailgate) it’s all here.   Oh and did I say BEACHES – they are uncrowded and serene with tons of wild life to observe.

Jacksonville ia Florida’s Business City. It is a regional insurance and banking center, as well as home to a number of major corporations. Many companies choose to relocate to Jacksonville as it’s affordable, no state income tax and offers their team members an enviable lifestyle.

Some of the more popular communities are listed below. Keep in mind there is not room enough to list them all.

Some of the larger private schools in Jacksonville include the Bolles School , Episcopal High School, Trinity Christian Academy, and Providence School, as well as two Catholic high schools, Bishop Kenny High School and Bishop John J. Snyder High School. There are a number of smaller private Christian and Catholic schools. Clarke Schools for Hearing and Speech, formerly Clarke School for the Deaf, operates a satellite school in Jacksonville, “Clarke Jacksonville”, and assists young deaf children to listen and talk. The main campus is located in Northampton, Massachusetts with three other satellite schools across the country. Clarke is the oldest school for the deaf that specializes in oral education (as opposed to sign language) in the country.

Jacksonville operates the largest urban park system in the United States, providing facilities and services at more than 337 locations on more than 80,000 acres located throughout the city. Jacksonville enjoys natural beauty from the St. Johns River and Atlantic Ocean. Many parks provide access for people to boat, swim, fish, sail, jetski, surf and waterski. Several parks around the city have received international recognition. Kids Kampus, in particular, is a unique facility for families with young children. List of parks in Jacksonville.

Jacksonville native Pat Boone was a popular 1950s singer and teen idol. During the 1960s, the Classics Four was the most successful pop rock band from Jacksonville. Southern Rock was defined by the Allman Brothers Band, which formed in 1969 in Jacksonville. Lynyrd Skynyrd achieved near cult status and inspired Blackfoot, Molly Hatchet and .38 Special, all successful in the 1970s. The 1980s were a quiet decade for musical talent in Jacksonville. The next local group to achieve national success was nu-metal band Limp Bizkit in 1994. Other popular Hip Hop acts in the 1990s included 95 South, 69 Boyz and the Quad City DJ’s. The bands Inspection 12, Cold and Yellowcard were also well known and had a large following. Following the millennium, Rob Roy, Burn Season, Evergreen Terrace, Shinedown, Electric President, The Red Jumpsuit Apparatus, Black Kids and The Summer Obsession, were notable bands from Jacksonville. 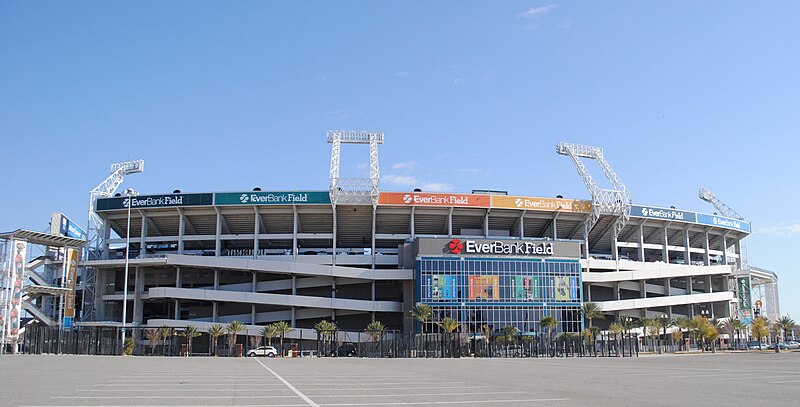 Jacksonville is home to one major league-level sports team, the Jacksonville Jaguars of the National Football League (NFL). The Jaguars joined the NFL as an expansion team in the 1995 season; they play their home games at EverBank Field. The PGA Tour, which organizes the main professional golf tournaments in the U.S., is headquartered in the suburb of Ponte Vedra Beach, where it holds The Players Championship every year.

College sports, in particular college football, are also popular in Jacksonville. The city hosts the Florida vs. Georgia Football Classic, an annual rivalry football game between the University of Florida and the University of Georgia, and the Gator Bowl, a post-season college bowl game.

Jacksonville is home to multiple military facilities, and with Naval Submarine Base Kings Bay nearby gives Jacksonville the third largest military presence in the country. Only Norfolk, Virginia and San Diego, California are bigger. The military is by far the largest employer in Jacksonville and its total economic impact is approximately $6.1 billion annually.

Jacksonville Beach combines the feel of an oceanside getaway with convenient access to a metropolitan area. If this is your type of lifestyle, there are plenty of GREAT Real Estate deals to consider.

It is part of the Jacksonville Beaches community, together with Mayport, Atlantic Beach, Neptune Beach, and Ponte Vedra Beach. Discover northeast Florida’s best-kept secret, Jacksonville Beach. Tucked away on a barrier island east of Jacksonville on Florida’s famous A1A, you’ll find miles of un-crowded white sandy beaches and lots to do.

With the Intracoastal Waterway, St. Johns River and the Atlantic Ocean to choose from Jacksonville Beach offers lots of opportunities whether you are a fisherman, a golfer, or a family looking for good clean fun. Jacksonville Beach offers some of the best sport fishing, boating and water sport opportunities in the country. Play in the ocean, walk or collect seashells along the beach, or stroll along the Sea Walk and watch for porpoise year-round or the northern right-whales that winter off our coast. At the Sea Walk Pavilion, you’ll find concerts or festivals nearly every weekend from April through October.